With the economic crisis raging across the globe, state leaders do not hesitate to cling to the slightest solution that could get them out of this situation. South Korea, which has not been spared by this economic crisis, has just issued a pardon decree against Lee Jae-yong, the vice-president and heir of Samsung Group, which allows the businessman formerly convicted of several financial crimes to return to the to revitalize the activities of the international firm for a potential economic recovery of the country.

For those who have not followed the course of this affair, you should know that since 2014, the date when Lee Kun-Hee’s health problems surfaced, notably with a heart attack which struck the latter, Lee Jae-yong (alias Jay Y. Lee) has taken over the de facto reins of the conglomerate Samsung Group. After a few years at the helm of the company, Lee Jae-yong, who is the grandson of Samsung Group founder Lee Byung-chul, was convicted in 2017 of corruption, embezzlement, perjury, and bribery ( approximately 38 million dollars) paid to the former president Park Geun-hye as well as one of her confidants in order to have the support of the political power concerning the succession at the head of Samsung and the merger between two Samsung subsidiaries. When this scandal reached the general public, and mainly that of the corruption of the president, it caused months of protest which finally got the better of former president Park, who admitted to resigning from office to appease the demonstrators. 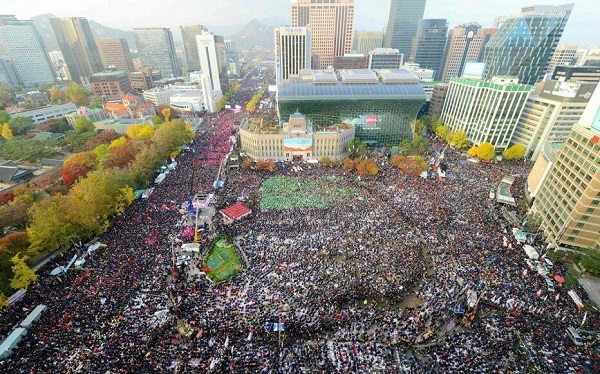 Following his resignation, Park was given a 20-year sentence on various counts, including Samsung-related corruption. Since the end of last December, a special pardon has been granted to the former president for the sake of national unity.

As for the Samsung heir, he was initially sentenced to five years in prison, but only spent one year in prison before being released on appeal. The Supreme Court having reversed this decision, in 2019, a second trial was opened and ended with a new sentence of two and a half years in prison. But after being jailed in January 2021, Lee was released in August of the same year after being granted parole. The judgment of this case is still in progress, the latter risks up to 12 years in prison. But already, with these convictions, Lee is no longer allowed to hold certain high-level positions in large South Korean companies such as Samsung for a period of five years after the end of his sentence.

However, faced with the challenges of the country that exceed those of a person, the South Korean president has decided to support Samsung Group by granting presidential pardon Lee Jae-yong. In a bid to overcome the economic crisis by revitalizing the economy, Samsung Electronics Vice Chairman Lee Jae-yong, whose suspended prison sentence ended recently, will be reinstated, the South Korean government said in a statement. .

Since the death of father Lee Kun-hee in October 2020 and the sentencing of son Lee Jae-yong, the group has been led by a team of senior executives. Lee Jae-yong having refused to hand over management to his children. This situation considerably slowed down the company’s decision-making and responsiveness. That’s why many people called for Lee Jae-yong’s grace to get the company back on track. Also, it’s worth pointing out that around 5 million people in South Korea own shares of Samsung. A healthy business would therefore contribute to the joy of many people in the country.

In a statement, Lee thanked the South Korean government for giving him the opportunity to start over. And to add I would like to express my apologies for having caused the concern of many people because of my shortcomings. I will work even harder to fulfill my responsibilities and duties as a businessman. We recall that Lee’s father, Lee Kun-hee was also found guilty of corruption and tax evasion in 1996 and 2008 and was pardoned twice. Apart from Lee Jae-yong, many other corporate executives including Lotte Group Chairman Shin Dong-bin, Dongkuk Steel Mill Chairman Chang Sae-joo and former STX Group Chairman Kang Duk-soo will benefit. also of this presidential grace. At a briefing, Justice Minister Han Dong Hoon said that with urgent needs to overcome the national economic crisis, we have carefully selected economic leaders who lead the engine of national growth through active technology investment and job creation for very graceful. On the other hand, for the politicians and the government employees who were condemned, no grace for them this time. This grace targeting businessmen will be officially announced on August 15th.

If for many people, this decision will revive the country’s economy by allowing the leaders of certain companies to return to business, this feeling is not shared by all. Indeed, a civil society coalition, including Peoples Solidarity for Participatory Democracy, reportedly issued a statement criticizing the decision to pardon business leaders who are no different from ordinary criminals. The non-governmental organization is also said to have accused President Yoon Suk Yeol of siding with the Chaebols, a large conglomerate of South Korean family businesses that dominate the entire economy and include companies such as LG, Hyundai and SK Group. According to rights groups, the pardon President Yoon Suk Yeol grants to these white-collar criminals is a betrayal that sends a signal to the chaebol leaders that they are free to commit any crimes they want, because after a few years, the presidential pardon grants them waits.

How do you judge this pardon granted Lee Jae-yong and several other financial criminals for the needs of the country’s economic recovery? Reasonable and Justified? Inappropriate and unnecessary?

In your opinion, will this grace from Lee Jae-yong really help revive Samsung’s activities and beyond all of South Korea?

Samsung fined 9.1 million euros for misleading ads about the water resistance of some of its smartphones

Xiaomi becomes the biggest seller of smartphones, taking advantage of the vacuum left by Huawei and problems in the Samsung supply chain